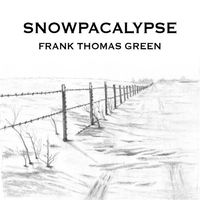 The Story of Snowpacalypse:
An orchestral composition conceived, written, and performed by Frank Thomas Green.

He was in his studio in Nashville, on a Sunday in February, looking out the bay window as the snow was falling… watching the tips of the brown grass disappearing beneath the white blanket… staring at the limbs of the bare trees becoming shrouded in the icy cold fluffy stuff. Mesmerized… an idea was emerging in his head…a melody. As the snow came falling faster… thicker… deeper than it had in many years in the southland, it sparked a distant memory…

It was1976... He and his lovely bride were returning home from a winter ski trip out west. They were living in a cool old farm house outside the small town of Elmwood, Nebraska. The huge country kitchen, warm living room fireplace and cozy office with beautiful dark wood pocket doors was, at one time, the home of the local doctor and his family. The newly weds were so looking forward to cuddling together in their warm, inviting waterbed on that night. Barely navigating their car off the icy I-80 exit ramp to Lincoln (due to the fact that the highway patrol had actually closed the interstate from Lincoln west), the young couple breathed a sigh of relief. They were home… well… almost home. Elmwood was situated another 30 miles east of Lincoln. When they reached the east side of Star City… the adventure began. They made it to Adams street. Adams street was a nicely paved and recently plowed street that quickly turned into an unplowed snow covered country road that appeared to almost disappear into a flat white desolation that vanished into the horizon. There was a long, barbed, 3-wire cattle fence that marked the edge of the road. There were times when the snow drift would peak higher than the barbed wire and the fence would disappear until the drift would fade into a shallowness that would once again reveal the fence and its posts. Then, there were times the road itself would vaguely reappear. Their little orange Fiat hatchback, fortunately, had front wheel drive. Bounding down the narrow country road… crashing through the drifts… drift after drift…. after drift… hoping that they were the only folks braving this lonely white road… and praying that they would not meet anyone coming toward them. The ebbing fence row was their only guide. There was no sense of a left or a right side of the road. Just the blinding, hypnotic, mesmerizing snow fall… that continued… staccato like… all around them.

Now…as I sit in my studio replaying this scene in my mind … eyes closed… picturing us bursting through each drift… like a ship crashing through each wave on the high seas… this theme… this ostinato… this song is playing in my head… Snowpacalypse!